(Céline Sciamma, French, 2021, 73 min.)
In this French fantasy drama, Nelly has just lost her grandmother and is helping her parents clean out her mother’s childhood home. When she meets a girl at a treehouse, the two form a close bond. But who, exactly, is the young stranger?

(Sylvie Ohayon, French, 2022, 101 min.)
Esther is nearing the end of her career as Head Seamstress for the prestigious fashion house Dior. When her handbag is stolen in the Paris Métro, Esther sees potential in her thief’s dexterity and soon puts her to work learning the craft of haute couture.

(Bille August, Danish/Swedish, 2016, 157 min.)
When his wife dies, Lasse takes his 12-year-old son, Pelle, from their home in Sweden to Denmark in search of a better life in this Palme d’Or- and Oscar-winning epic based on the acclaimed Danish novel.

(Viktor Kosakovskiy, no dialogue, 2020, 93 min.)
Shot in black and white and with no dialogue, this stunningly filmed and profoundly moving documentary places the viewer at ground level to follow the daily life of a sow named Gunda, her piglets, two cows, and a one-legged chicken.

(Hun Jang, Korean, 2017, 137 min.)
In this action drama based on real events, a widowed taxi driver who takes a German reporter from Seoul to Gwangju to cover the 1980 uprising soon finds himself regretting his decision when he is caught in the violence around him.

Martin Margiela: In His Own Words

(Reiner Holzemer, English/French, 2019, 90 min.)
A rare look inside the creative process of a design house as told by the media-shy founder of the acclaimed Maison Margiela. Featuring interviews by industry greats, this documentary gives unprecedented access to the mind of one of fashion’s most mysterious creators.

(Chris Weitz, English/Spanish, 2011, 98 min.)
A single father, without legal status, struggles in Los Angeles to avoid deportation while providing his son with a better life.

(Benedikt Erlingsson, Icelandic, 2018, 101 min.)
Halla, a 55-year-old quietly independent woman, leads a double life as an environmental activist waging a one-woman-war on the local aluminum industry. As she begins planning her biggest operation yet, an unexpected letter changes everything.

(Sarah Moldoror, Portuguese/Lingala, 1972,  97 min.)
Set in 1961 at the onset of the Angolan War of Indepence from Portugual, Sambizanga follows an Angolan militant who risks being tortured to death if he does not give up the names of fellow dissidents. This first feature produced by a Lusophone African country employs non-professional political activists as actors.

The Colors of the Mountain

(Carlos César Arbeláez, Spanish, 2010, 90 min.)
In the mountains of Colombia, nine-year-old Manuel loves soccer, school, and playing with friends. That existence is challenged by a violent reality that he barely understands and that causes those around him to abandon their homes and migrate from the area.

(Ruijun Li, Mandarin, 2022, 131 min.)
A humble man and a sickly woman forge a loving bond in their arranged marriage as they work the land and try to build a home for themselves in rural China in this meditative and beautifully filmed drama that was targeted by China’s censors shortly after its release.

A Feature Film About Life

(Dovile Sarutyte, Lithuanian, 2021, 100 min.)
A woman chooses to reject professional services and organize her father’s funeral herself. As she navigates challenges while trying to orchestrate the funeral, she finds herself reflecting on childhood memories.

(Mounia Meddour, Arabic/French, 2018, 108 min.)
In 1997 Algiers, while Islamic fundamentalists seek to impose a repressive regime, a young student and aspiring fashion designer, Nedjma, plans a fashion show as an act of creative rebellion.

(Phillip Noyce, English/Walmajarri, 2002, 94 min.)
Based on the true story of three Aborigial children in 1931 Australia who walk 1,500 miles along a fence to return to their mother after being removed from her care by the government.

The Disappearance of My Mother

(Beniamino Barrese, Italian, 2019, 94 min.)
An iconic fashion model of the 1960s strives to escape the world of images and disappear for good, but her son’s determination to make a final film about her sparks an unexpected collaboration and confrontation with the camera’s gaze.

(Aki Kaurismäki, French, 2011, 93 min.)
When an African boy arrives by cargo ship in the port city of Le Havre, an aging shoe shiner befriends the child and welcomes him into his home.

(Eran Riklis, Arabic/Hebrew, 2014, 104 min.)
A young Palestinian-Israeli named Eyad is sent to a prestigious boarding school in Jerusalem, where he struggles with issues of language, culture, and identity.

The Gospel According to André

(Kate Novack, English, 2017, 93 min.)
An intimate portrait of one of the great fashion journalists of our time, André Leon Talley, from his roots in a segregated American South to his ascension to the highest realms of fashion as editor-at-large for Vogue.

No Dogs nor Italians Allowed

(Alain Ughetto, French/Italian/German, 2022, 70 min.)
In this animated family chronicle, director Alain Ughetto retells the history of his family that emigrated from a small town in Italy across the border into France.

Beasts of the Southern Wild

(Benh Zeitlin, English, 2012,  93 min.)
Hushpuppy, an intrepid six-year-old girl, lives with her father, Wink, in the Bathtub, a southern Delta community at the edge of the world. When Wink contracts a mysterious illness, Hushpuppy must contend with rising waters and prehistoric creatures as she searches for her lost mother.

(Moonika Siimets, Estonian/Russian, 2018, 99 min.)
In the midst of Stalin’s Communist tyranny in Estonia, six-year-old Leelo’s mother is sent to a Siberian prison camp. Haunted by her mother’s promise to return if Leelo is a good girl, the 6-year-old tries to be on her best behavior in a confusing world of grown-ups.

(Miguel M. Delgado, Spanish, 1974, 95 min.)
The masked Luchador who fights for justice inside the ring and out became a staple of Mexican cinema in the 1960s and 70s. In this film, El Santo and Blue Demon oppose the fiendish plans of Dr. Frankenstein’s grandson.

(Jared Hess, English/Spanish, 2006, 92 min.)
In Jared Hess’s follow-up to Napoleon Dynamite, Jack Black plays a Mexican monk who becomes a Luchador to better care for the orphans at his monastery.

(Maria Sødahl, 2019, Norwegian/Swedish, 125 min.)
The relationship between artist-partners Tomas and Anja is put to the test after Anja gets a life-threatening diagnosis.

(Jean-Pierre Dardenne and Luc Dardenne, French, 2002)
Olivier, a skilled carpentry teacher at a vocational school in Liège, refuses to take on a new teenage student, but then begins to follow the boy through the hallways and streets in this tale of forgiveness and redemption by the legendary Dardenne brothers.

(Adrian Francis, Japanese, 2021, 80 min.)
Just after midnight on March 10, 1945, the U.S. launched an air attack on Tokyo that started fires that left more than 100,000 people dead. This documentary follows three survivors who of that event who face opposition in their current quest for recognition and reparations from the Japanese government.

(Dmitriy Kiselev/Aleksandr Voytinskiy, Russian, 2009, 102 min.)
In Russians’ first ever superhero movie, a Moscow college student receives a mysterious car that, as he soon learns, can fly.

Letters from a Distance

(Juan Carlos Rulfo, Spanish, 2021, 81 min.)
Filmed largely by medical personnel in Mexico City, this documentary explores the ways families were separated and brought together at the start of the COVID pandemic.

(Klaus Härö, Finnish, 2009, 74 min.)
With few options, newly pardoned convict Leila agrees to work as an assistant to a blind pastor. Father Jacob spends his days answering the letters of the needy, which Leila finds pointless. But when the letters stop, the pastor is devastated and Leila finds herself cast in a new role.

(Dace Puce, Latvian, 2020, 107 min.)
After she makes disparaging remarks about his father, a 10-year-old boy tricks a girl into falling into a pit. This film was the Latvian entry for Best International Feature Film at the 94th Academy Awards.

(Likarion Wainaina, Swahili/Kikuyu/English, 2018, 74 min.)
In Kenya, a young girl’s desire to become a superhero is challenged by a terminal illness.

(Asghar Farhadi, Persian, 2011, 123 min.)
A  married couple is faced with a difficult decision: to improve the life of their child by moving to another country or staying in Iran and looking after a parent suffering from Alzheimer’s disease.

(Walter Salles, Portuguese, 2001, 205 min.)
In Brazil, a son questions the tradition of avenging deaths that has left two families mired in violence.

(Oualid Mouaness, Arabic, 2019, 100min.)
During the 1982 invasion of Lebanon, an 11-year-old boy tries to tell a classmate about his crush on her while their teachers try to hide their fear of the conflict.

(Takashi Miike, Japanese, 2004, 115 min.)
A down-on-his-luck school teacher turns into the now forgotten superhero that he and one of his young students idolize.

(Apichatpong Weerasethakul, English/Spanish, 2021, 136 min.)
While traveling in Colombia, a Scottish woman (Tilda Swinton) begins to experience a mysterious sensory syndrome that leads her on an investigative journey.

(Hannes Holm, Swedish, 2015, 116 min.)
Ove, an ill-tempered retiree who spends his days enforcing block association rules and visiting his wife’s grave, has given up on life just as an unlikely friendship develops with boisterous new neighbors.

The Man Who Feels No Pain

(Vasan Bala, Hindi, 2018, 138 min.)
Born with a rare condition that leaves him unable to feel pain, Surya learns martial arts and sets out to fight crime.

(Natalia Sinelnikova, German, 2022, 93 min.)
A tower block on the edge of a forest may be one of the last bastions of civilization in this post-apocalyptic tale. Gaining (and keeping) residency in the building is not an easy task as fear and paranoia run rampant.

(Thomas Vinterberg, Danish/English/Polish, 2012, 115 min.)
A teacher in a small Danish village becomes the target of mass hysteria when he is wrongfully accused of sexually abusing a child in his kindergarten class.

(Jayro Bustamante, Kaqchikel/Spanish, 2015, 93 min.)
On the slopes of an active volcano in Guatemala, a marriage is arranged for 17-year-old María by her Kaqchikel parents. This first ever feature film shot in the Kaqchikel language explores the complex position of marginalized indigenous Guatemalans.

(Antoneta Alamat Kusijanovic, Croatian, 2021, 96 min.)
A teenage girl decides to replace her controlling father with his wealthy foreign friend during a weekend trip to the Adriatic Sea.

A Silent Voice: The Movie

(Naoko Yamada, Japanese, 2016, 130 min.)
Based on the manga of the same name, A Silent Voice follows the redemptive journey of an outcast with anxiety and depression as he seeks to make amends with a deaf girl he once bullied. This psychological coming-of-age drama explores mental health, suicidal ideation, friendship, and forgiveness.

(Paolo Taviani and Vittorio Taviani, Italian, 2012, 75 min.)
Inmates at a high-security prison in a suburb of Rome prepare for a public performance of Shakespeare’s Julius Caesar in this documentary by the acclaimed Taviani brothers.

(Hayao Miyazaki, Japanese, 1997, 134 min.)
On a journey to find the cure for a Tatarigami’s curse, Ashitaka finds himself in the middle of a war between the forest gods and Tatara, a mining colony. In this quest he also meets Princess Mononoke, the human companion of the wolf god, Moro.

The Lives of Others

(Florian Henckel von Donnersmarck, German, 2004, 137 min.)
In 1984 East Berlin, an agent of the secret police, conducting surveillance on a writer and his lover, finds himself becoming increasingly absorbed by their lives.

The King of Masks

(Tian-Ming Wu, Mandarin, 1996, 91 min.)
In 1930s China, Wang is The King of Masks, an aged street performer who practices the change-mask opera art of bian lian. He laments that he has no male heir to carry on his mysterious and complicated art. When he adopts a grandson as his apprentice, Wang is confronted with a surprising turn of events.

Co-directors Marc Yamada, Doug Weatherford, and Marie-Laure Oscarson talk about the return to live screenings and spotlight some of their favorites for this semester.
Read More 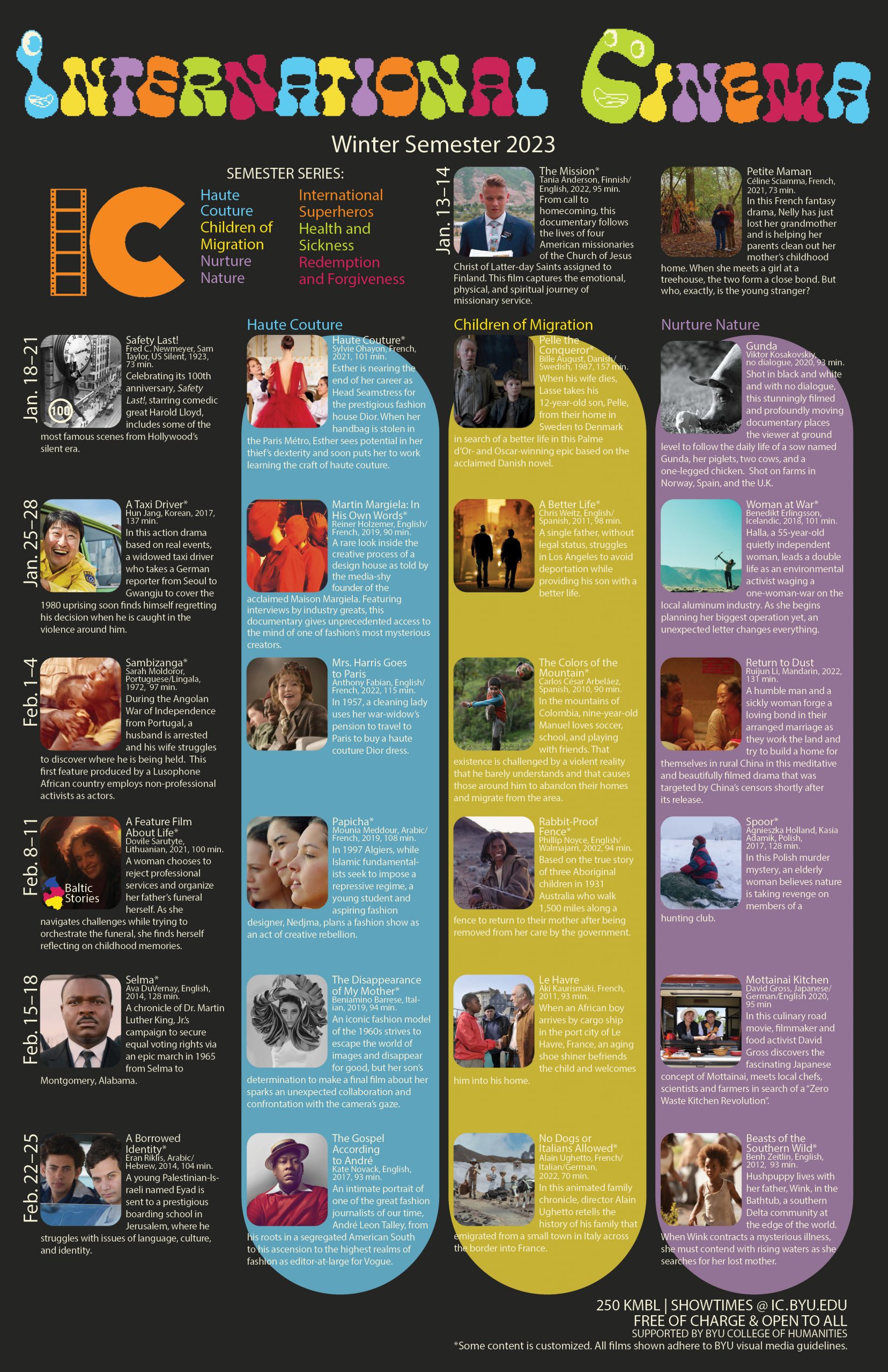 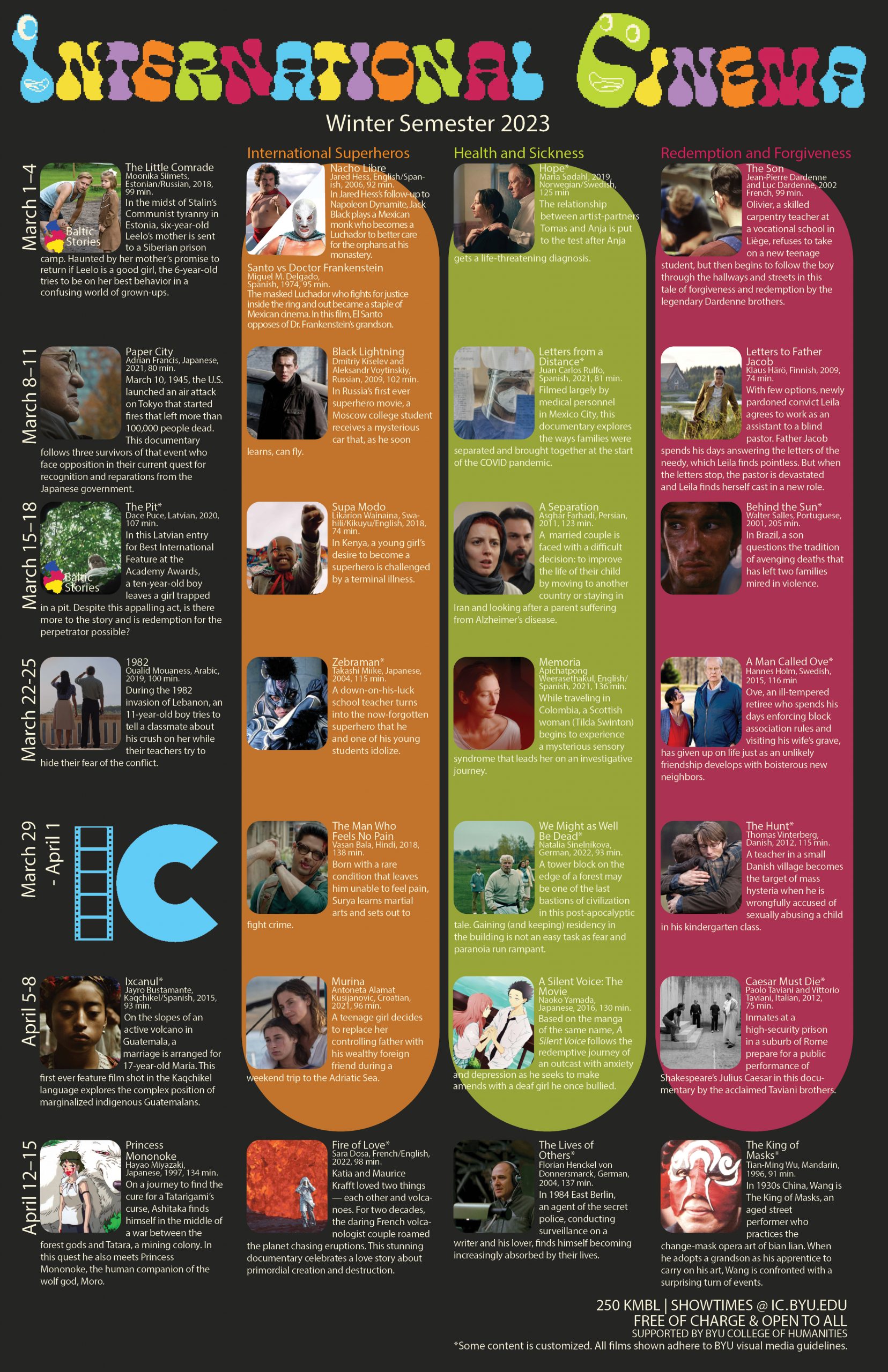