By international cinemaJune 3, 2019 No Comments 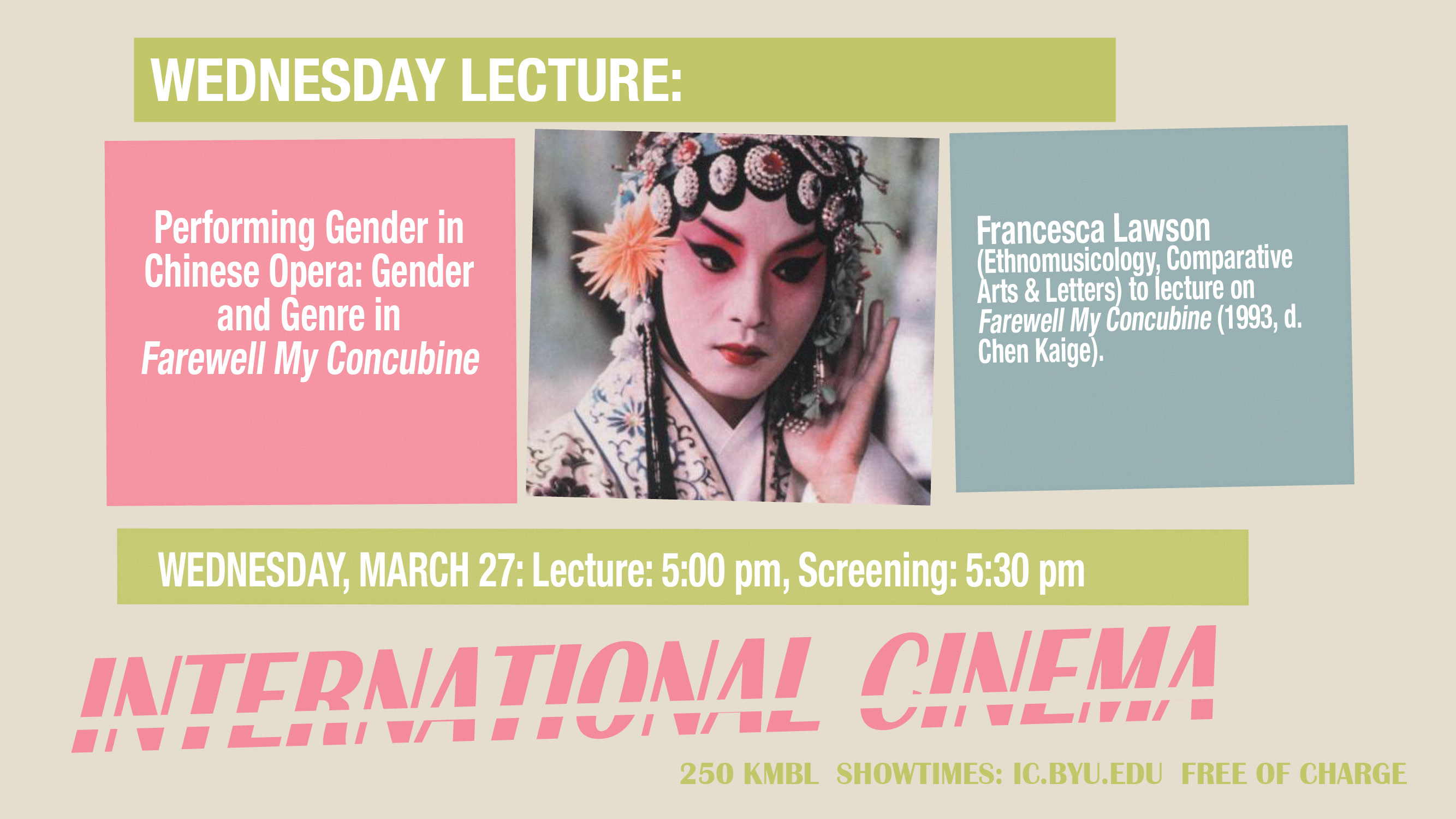 Professor Francesca Lawson (Comparative Arts and Letters) discusses the roles of gender and genre in Chinese opera, and relates it to Chen Kaige’s film Farewell My Concubine.

PROVO, Utah (March 27, 2019)—Chinese opera is one of the most world-renowned part of China’s long and rich artistic culture. Since the time of the Tang Dynasty (618–907 AD), opera has been loved by many generations. On the stage, actors portray stories of love, bravery, and sacrifice in an attempt to speak to the human heart.

One such story, the king and the concubine, has been around for hundreds of years. The folktale is based on the true story of the warlord Xiang Yu and his concubine, Yu Miaoyi. Faced with imminent defeat by the hands of enemy warlord, Xiang Yu found himself abandoned by all his men. Only his concubine stayed by his side, pledging her undying loyalty to him before committing suicide to prove she would never leave him.

Professor Francesca Lawson spoke of the genre fluidity of Chinese opera. “The idea of adaptation, which usually in the west is from novel to film, is seen on many different levels in Chinese culture, and it’s part and parcel of the culture,” she stated. “The Chinese are the best recyclers in the world. They can take any idea and find a multiplicity of ways to express it.”

Like genre, gender is fluid in traditional Chinese opera. Lawson noted how “gender boundaries are much more fluid in the Chinese culture than they are in western European and North American cultures.” She went on to explain how historically in China, opera troupes were generally all-male. As such, certain men would be chosen based on their looks and mannerisms to fulfill the Dan (female) roles.

The fluidity of the genders in Chinese opera made the male Dan extremely popular. Lawson attributed this to the fact that “Men appreciated seeing the male Dan because they could focus on the Dan’s artistry rather than become distracted by the body of a female actor.” The male Dan appealed to others as well; Lawson noted that “They were adored by women because of the sympathetic portrayal of female characters. And people of all sexual orientations enjoyed male Dan because of the inherent androgyny of the character.”

Both the fluidity of genre and gender helped lead to Chen Kaige’s film, Farewell My Concubine. Lawson recalled how at first in the story of the king and concubine, the king was the main focus of the story. This changed when, thanks to famous female impersonator Mei Lanfang, a version of the story was made for the stage where the concubine took precedence. Lawson explained how the concubine’s virtue and loyalty was highlighted, while the king became a less-important, very flawed character. From there, the story was adapted into Lillian Lee’s novel and finally into the 1993 film, Farewell My Concubine.

The film follows the stories of two opera actors as they endure nearly fifty years of China’s history, from the 1920’s through the Cultural Revolution of the 1960’s.  As both Duan Xiaolou (who plays the king) and Cheng Dieyi (who plays the concubine) have to adapt and endure their country’s changing values, the audience sees the same loyalty found in the story of the king and his concubine.

Lawson observed how “Their entire lives kind of reflect the same sort of relationship,” with both genre and gender fluidity playing major parts in the two men’s lives. The genre of stage acting becomes blurred with their real lives as the two go in and out of their roles but still reflect the values and flaws that their characters embody. Even the boundaries of gender are tested; Cheng Dieyi finds himself becoming androgynous to both himself and others on several occasions as he nearly gets lost in his role as the concubine.

By blurring traditional ideas of both genre and gender boundaries, Farewell My Concubine tells the same stories of love and sacrifice in a new way. In the end, Lawson noted, when “the pressure’s on Duan Xiaolou to ‘Give in, give in,’ he does.” Even then, when even his dearest friend has betrayed him, Cheng Dieyi stays true. Lawson concluded by saying that “the triumph of the film is really Cheng Dieyi’s enduring love both for Duan Xiaolou and for his dedication to the art of Chinese opera.”