The Young Girls of Rochefort

(Jacques Demy, French, 1967, 125 min.)
Shot on location in the seaside town of Rochefort, Jacques Demy’s big-budget musical revolves around twin sisters who dream of finding love and fame outside of their provincial life. The film also features a French-speaking Gene Kelly.

In the Mood for Love

(Wong Kar-Wai, Cantonese/Shanghainese, 2000, 98 min.)
In his signature lush visual style, Wong Kar-Wai tells the story of two neighbors in 1960s Hong Kong who form a strong—although platonic—bond after they suspect their spouses are having an affair.

Nanook of the North*

(Marcin Wrona, Polish/Yiddish/Russian, 2015, 94 min.)
In a Polish town, bridegroom is possessed by an unquiet spirit in the midst of his own wedding celebration in this clever take on the Jewish legend of the dybbuk.

(Nir Bergman, Hebrew, 2020, 94 min.)
Aharon’s bond with his autistic son Uri is so strong that when the boy’s mother pushes for the adult child to be moved to a specialized home, the father and son hit the road in their native Israel. But is it Uri who’s not ready for the change or is it his father?

(Hauke Wendler, Hindi/German/Portuguese/French/Italian 2021, 90 min.)
Love it or hate it, the monobloc plastic chair (forged in a single piece) is the best-selling furniture item of all time. This documentary visits a number of countries to tell the story of an unsightly chair that took the world by storm.

(Åsa Ekman, Oscar Hedin, Mikael Kristersson, Mandarin, 2021, 70 min.)
In Hunyuan, China, three farming families strive to give their children a better life in the face of an ecological crisis caused by the overuse of pesticides.

(Bong Joon-ho, Korean, 2006, 120 min.)
A monster emerges from Seoul’s Han River and focuses its attention on attacking people. The loving family members of one victim do all they can to rescue her from its clutches in this international hit by the director of Parasite.

(Kenneth Branagh, English, 2021, 98 min.)
Set in Northern Ireland in the late-1960s, this acclaimed coming-of-age tale follows a young boy’s tumultuous childhood at the beginning of the conflict known as The Troubles.

(Haifaa al-Monsour, Arabic, 2012, 98 min.)
Determined to buy a green bicycle that has captured her interest, an enterprising Saudi girl signs up for her school’s Quran recitation competition in hopes of using the prize money to reach her goals in this first feature film shot entirely in Saudi Arabia.

(Guillermo del Toro, Spanish, 2001, 106 min.)
Set at an isolated and haunted orphanage during the final year of the Spanish Civil War, Guillermo del Toro’s underappreciated precursor to Pan’s Labyrinth fuses political and supernatural horror in this creepy meditation of the nature of ghost stories.

(Hayao Miyazaki, Japanese, 2001, 125 min.)
During her family’s move to the suburbs, a sullen ten-year-old girl wanders into a world ruled by gods, witches, and spirits, and where humans are changed into beasts. This Studio Ghibli megahit  was written and directed by the legendary Miyazaki.

(Yann Gozlan, French, 2020, 129 min.)
Matthieu is a young and talented black box analyst on a mission to solve the reason behind the deadly crash of a brand new aircraft. When the case is prematurely closed by authorities, Matthieu cannot help but sense that something sinister is going on.

(Jeferson De, Portuguese, 2021, 92 min.)
Based on the life of celebrated nineteenth-century Brazilian abolitionist Luís Gama, this compelling drama follows Gama from his enslavement at age ten to his triumphant rise as a lawyer who used the court system to free more than 500 slaves.

(Hideo Nakata, Japanese, 2002, 101 min.)
A divorced mother moves into a rundown apartment with her daughter, and experiences supernatural occurrences connected to a mysterious water leak from the floor above

(Céline Sciamma, French, 2021, 73 min.)
In this French fantasy drama, Nelly has just lost her grandmother and is helping her parents clean out her mother’s childhood home. When she meets a girl at a treehouse, the two form a close bond. But who, exactly, is the young stranger?

(Lois Weber, French Subtitles, 1916, 60 min.)
A young woman grows tired of being the sole provider in her family. Strapped for cash, what will she do for a new pair of shoes? A beautifully restored film by one of the great women filmmakers of American silent cinema. Shoes will be preceded by the French silent short The Drunken Mattress (Alice Guy, 1906, 9 min.)

La Camioneta:  The Journey of One American School Bus*

(Mark Kendall, Spanish, English, 2012, 71 min.)
This fascinating documentary follows the fate of a decommissioned yellow school bus from the United States to Guatemala, where it gains new life as one  of the brightly colored camionetas that bring Guatemalans to work each day.

(Herk Harvey, English, 1962, 78 min.)
After a traumatic accident, a woman is drawn to a mysterious abandoned carnival (filmed in part at the Saltair Pavilion outside Salt Lake City). Shot on a micro-budget and featuring a creepy organ score, this cult hit has inspired filmmakers such as David Lynch and George A.Romero.

(Ruben Östlund, Swedish and Norwegian, 2014, 120 min.)
This darkly comic family melodrama explores the aftermath of an apparent avalanche in the French Alps during which a Swedish husband prioritizes his own escape over the safety of his wife and children.

The Secret World Of Arrietty

(Hiromasa Yonebayashi, Japanese, 2010,  94 min.)
Lilliputian heroine Arrietty gleans with ingenuity through an oversized human world in this Studio Ghibli adaptation of The Borrowers by Mary Norton.

(Anno Saul, Greek, Turkish, and German, 2004, 96 min.)
In this comedy set in Hamburg, Ibrahim “Ibo” Secmez, of Turkish descent, wants to film the first German kung-fu movie. For now, he makes commercials for his uncle’s kebab restaurant and wonders if he’s ready for fatherhood.

(Xavier Burgin, English, 2019, 73 min.)
Black horror in the United States did not begin with Jordan Peele’s Get Out! In fact, it is as old as film itself. This entertaining, informative, and sometimes gory documentary looks at the evolution of horror and the representation of Black people in the genre.

The Man Who Sold His Skin*

(Kaouther Ben Hania, Arabic, French, Flemish, 2020, 104 min.)
Sam, a Syrian refugee, finds that it may be easier to reach Europe as a work of art than as a human. When his back becomes the canvas in a provocative art experiment, Sam must contend with his new objectified status.

The Earth is Blue as an Orange*

(Iryna Tsilyk, Russian/Ukrainian, 2020, 74 min.)
To cope with the daily trauma of living in a war-zone of Donbas, Ukraine, single mother Anna and her four children make a film about their life together. This Sundance award-winning documentary looks at the power of art amid traumatic circumstances.

(Valentyn Vasyanovych, Ukrainian, 2019, 108 min.)
Set in 2025, the year after a war with Russia, this deeply unsettling and unflinching depiction of postwar trauma was filmed using veterans, volunteers, and soldiers rather than professional actors. Though at times painful to watch, the film demonstrates a deep love of humanity and the possibility of resilience.

(Oles Sanin,Ukrainian/Russian/English,  2014, 122 min.)
An American boy and a blind itinerant kobzar (bard) are thrown together by fate in this drama set in the turbulent Holodomor, a man-made famine in Soviet-dominated Ukraine in the early 1930s that killed millions.

Man with a Movie Camera*

(Dziga Vertov, Silent Ukrainian, 1929, 68 min)
This Soviet-era experimental documentary follows a day in the life of citizens from Moscow, Kyiv, and Odessa while pushing the language of film to new heights. Largely dismissed upon its release, this Ukrainian film has since gained acclaim as one of the greatest documentaries of all time.

(Tania Anderson, Finnish and English, 2022, 95 min.)
From call to homecoming, this documentary follows the lives of four American missionaries of the Church of Jesus Christ of Latter-day Saints assigned to Finland. With unprecedented access and a curious eye, filmmaker Tania Anderson captures the emotional, physical, and spiritual journey of missionary service.

(Khyentse Norbu, Hindi and Tibetan, 1999, 93 min.)
While the soccer World Cup is being played in France, two young Tibetan refugees arrive at a monastery boarding school in exile in India. Soon, the atmosphere of serene contemplation is disrupted by soccer fever.

(Magnus von Horn, Polish, 2020, 106 min.)
A Polish fitness influencer with more than 600,000 Instagram followers faces loneliness and danger as she tries to balance a picture-perfect image with a desire for authenticity.

The Secret Life of Bees*

The Year My Parents Went on Vacation*

(Cao Hamburger, Portuguese, 2006, 110 min.)
The young son of anti-dictatorship political activists finds himself alone in a Jewish neighborhood in São Paulo, Brazil in 1970. Against a backdrop of political persecution, the country is bustling with excitement for the upcoming World Cup.

(Hong Seong-eun, Korean, 2021, 91 min.)
Jina, a solitary young Korean woman who works at a call center, reevaluates her life after her neighbor dies alone in his apartment. With a new neighbor, a talkative new employee to train, and an inheritance to sort out, Jina might be forced out of her shell.

(Anne Fontaine, Polish and French, 2016 115 min.)
In 1945 Poland, French Red Cross doctor Mathilde works with survivors of the German camps. When she is asked to treat nuns in secret at a convent, she learns that several of these women are pregnant.

(Alejandro Loayza Grisi,Quechua and Spanish 2022, 87 min.)
In the Bolivian highlands, an elderly Quechua couple has been living the same daily life for years. During an uncommonly long drought, Virginio and his wife Sisa face a dilemma: resist or be defeated by the environment and time itself.

(Isaac Halasima, English, 2022, 88 min.)
Five-time Olympic medalist and Native Hawaiian Duke Paoa Kahanamoku shattered records and brought surfing to the world while overcoming a lifetime of personal challenges. Waterman explores his journey and legacy as a legendary swimmer, trailblazer, and the undisputed father of modern-day surfing.

This Is Not a Burial, It’s a Resurrection

(Lemohang Jeremiah Mosese, Sotho, 2019, 120 min.)
When her village in Lesotho is threatened with forced resettlement due to reservoir construction, an 80-year-old widow finds a new will to live and ignites a spirit of resilience within her community.

(Juan Pablo Rebella and Pablo Stoll, Spanish, 2004, 94 min.)
When his more successful brother comes to town, Jacobo, who runs a small sock factory in Montevideo, Uruguay, wants to prove his life has added up to something. Jacobo asks one of his employees, Marta, to pretend she’s his wife during the visit.

(Stephen Chow, Cantonese and Mandarin, 2001, 87 min.)
A young Chinese Shaolin follower reunites with his discouraged brothers to form a soccer team using their superhuman martial art skills to their advantage in this wildly entertaining comedy.

(Mamoru Hosoda, Japanese, 2021, 121 min.)
In this animated Japanese sci-fi adaptation of Beauty and the Beast, a shy high school student from a rural village enters a massive virtual world called “U” and escapes into her online persona as a globally-beloved singer named Belle.

(Abderrahmane Sissako, Arabic, French, Bambara, Songhay, Tamashek, 2014, 96 min.)
A cattle herder and his family who reside in the dunes of Timbuktu in Mali find their quiet lives disturbed by Salafi Jihadists determined to control their faith.

(Jessica Beshir, 2021, Amharic 120 min.)
A spiritual journey into the highlands of Harar, immersed in the rituals of khat, a leaf Sufi Muslims have chewed for centuries for religious meditations, and Ethiopia’s most lucrative cash crop today.

(Marwa Zein, Arabic, 2019, 75 min.)
In this Sudanese sports documentary four years in the making, a group of women in Khartoum are determined to play soccer professionally despite the ban imposed by Sudan’s Islamic Military government.

(Hanna Bergholm, Finnish, 2022, 86 min.)
In this offbeat horror comedy from Finland, a young gymnast who tries desperately to please her image-obsessed mother, discovers and cares for a strange egg. When the egg hatches, what emerges shocks them all.

The Scent of Green Papaya

Co-directors Marc Yamada, Doug Weatherford, and Marie-Laure Oscarson talk about the return to live screenings and spotlight some of their favorites for this semester.
Read More 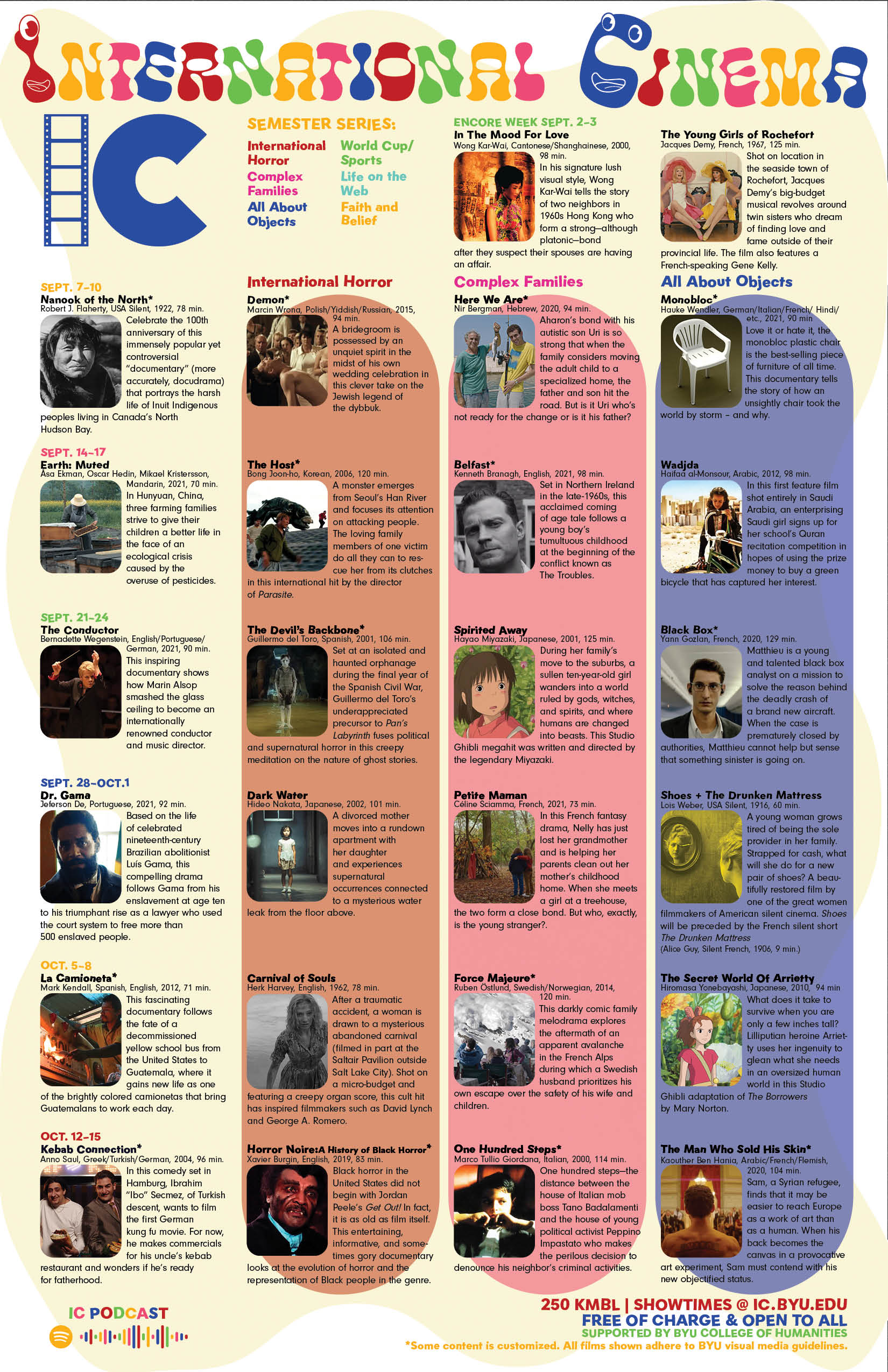 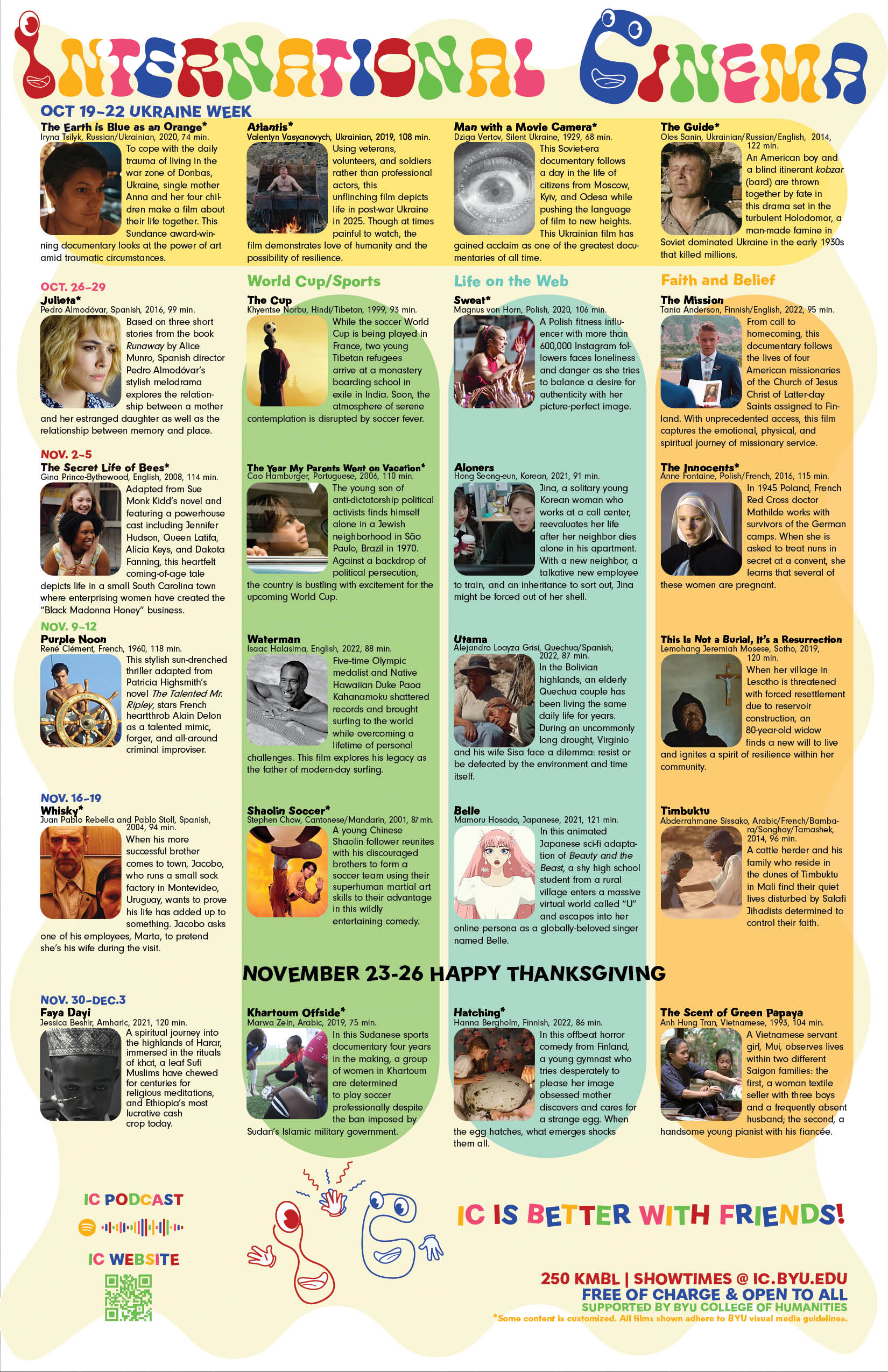